One of the most amazing, untouched parts of Iran is Kurdistan province. This mountainous region is located in the west part of the country and with a very delightful climate and unique natural landscapes, which is home to one of the most authentic and original Iranian tribes.

Having a unique rural stepped texture, architecture, lifestyle, and agriculture, Hawraman is a historical region located in the Kurdistan province of Iran.

While the main part of Hawraman is located in Sanandaj, Marivan, Sarvabad, and Kamyaran cities of Kurdistan province, another part of it is located in Halabja province in Iraqi Kurdistan.

The history of this magnificent region dates back to thousands of years ago. Archeologists have discovered some stone tools in a cave located near the village, which had been made by Neanderthals or early modern humans more than 40 thousand years ago.

Also, recently, a group from UNESCO traveled to the Hawraman region so as to look into the possibility of listing the beautiful historical region as a world heritage site.

It is a mountain village resembling the tiered Masouleh Village in Gilan Province but on a much larger scale. For this reason, it has been nicknamed ‘1,000 Masoulehs.’

The villages of the Uramanat rural area enjoy the most famous characteristics that are unparalleled in terms of architecture, lifestyle and agricultural methodology which is integrated with nature by incorporating steep-slope agriculture.

According to the people’s belief, Uraman used to be a big city and of great importance in the past, hence it was known as Takht (meaning throne) or the center of the government.

At an altitude of 1450 meters above sea level, the village enjoys mild weather in spring and summer, and cold weather during fall and winter.

Hawraman is a vast and mountainous area of Zagros which includes the entire south of Kurdistan Province, and Uraman Takht village.

One is astounded and amazed at how the local people living in the area have managed to skillfully construct their homes in the shape of many long and wide stairs within the foothills of the mountain. These buildings have been built in such a way that the roof of a house is the patio (balcony) of the house built just a few meters above it.

The roof of each house forms the yard of the upper one, and the walls are made without using any mortar, just by artistically putting pieces of stone on top of one another. The most frequently used materials in the construction of buildings are stone and wood, and the wood is usually from walnut or plane trees. 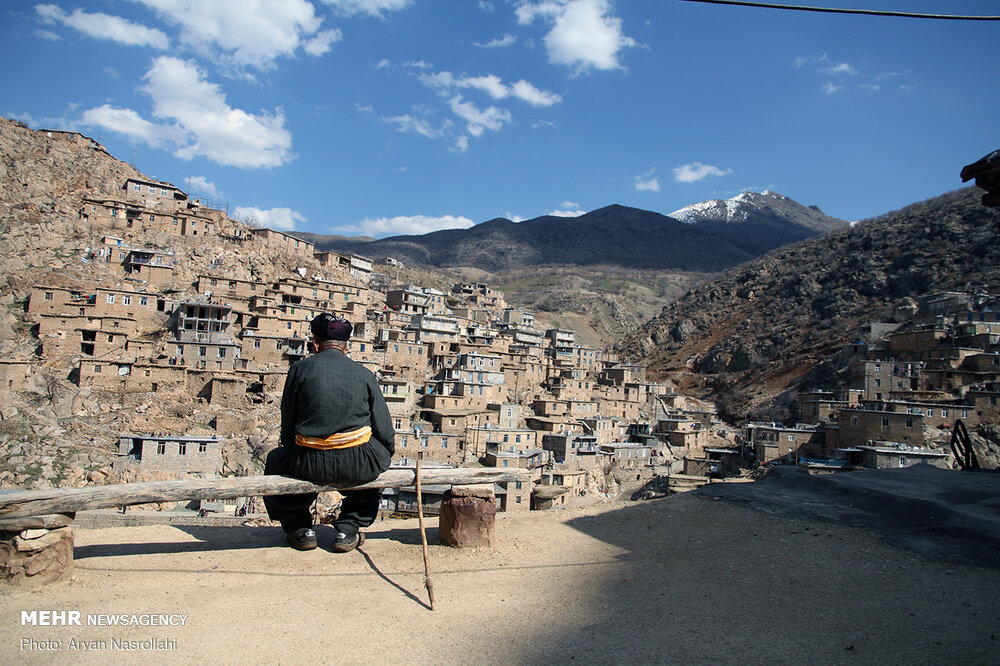 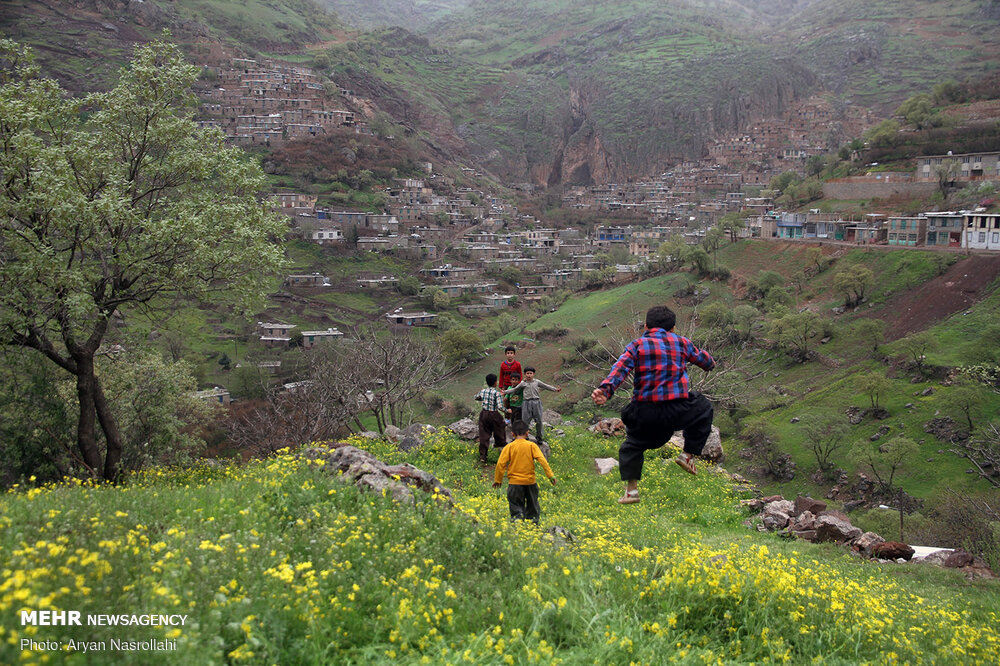 The culture of the region is very rich and remarkable. The residents of the village are Sunni Muslims and speak in the Urami or Hawrami dialect of the Kurdish language.

The dialect is believed to be one of the oldest dialects of the northwestern Iranian language, Zaza-Gorani. According to a survey carried out in 1996, there were 40 thousand speakers of this language in the world.

Just like the people of other villages of Kurdistan, residents of Uraman wear local Kurdish clothes, of bright and attractive colors and patterns.

Traditional clothing for women includes either a vest or long-sleeved jacket or long overcoat worn over a gown. 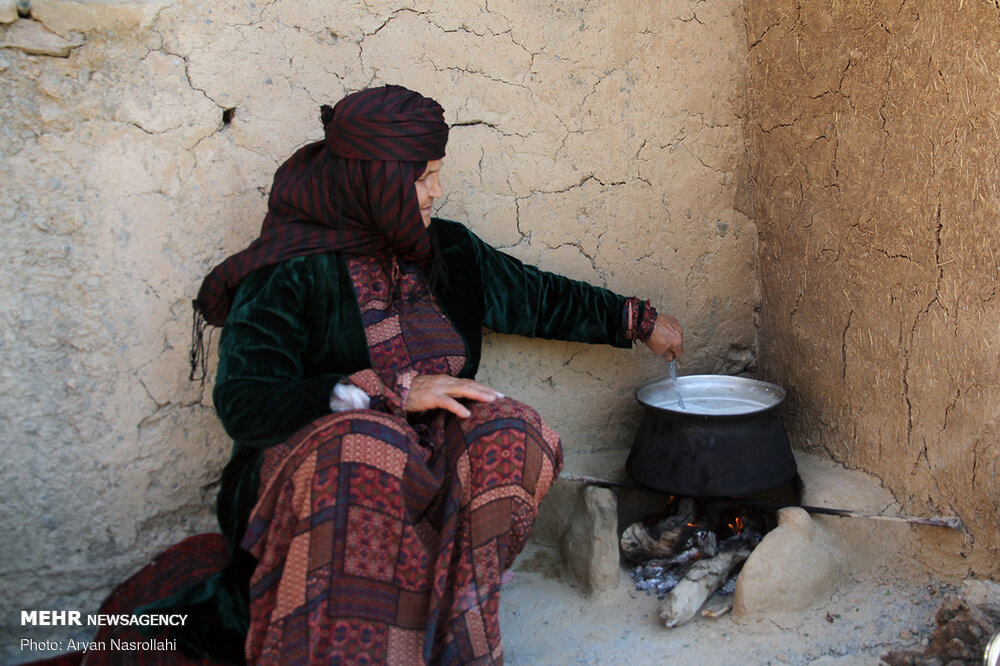 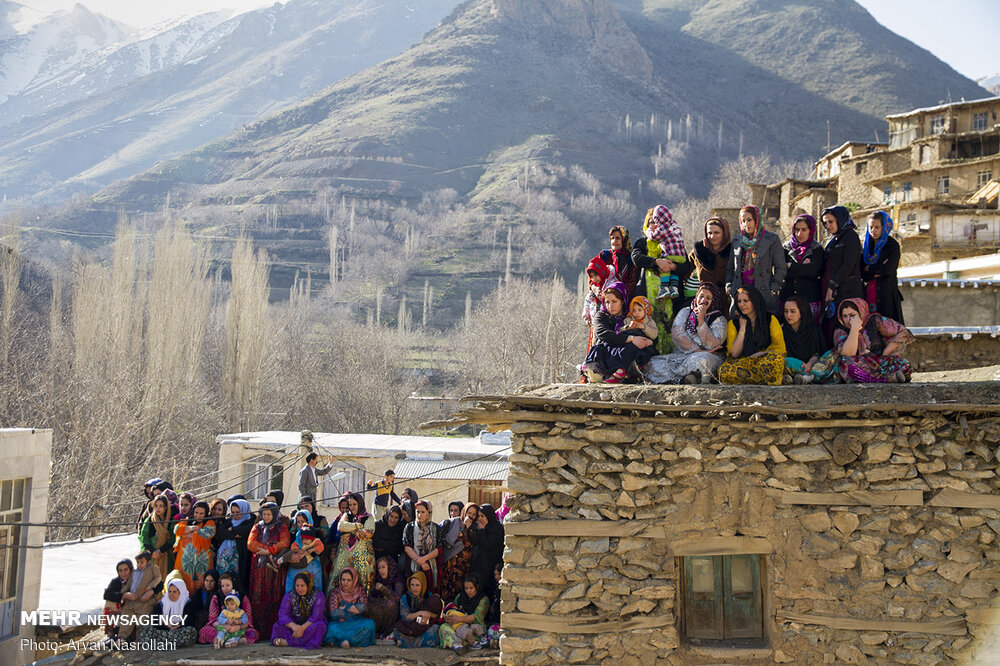 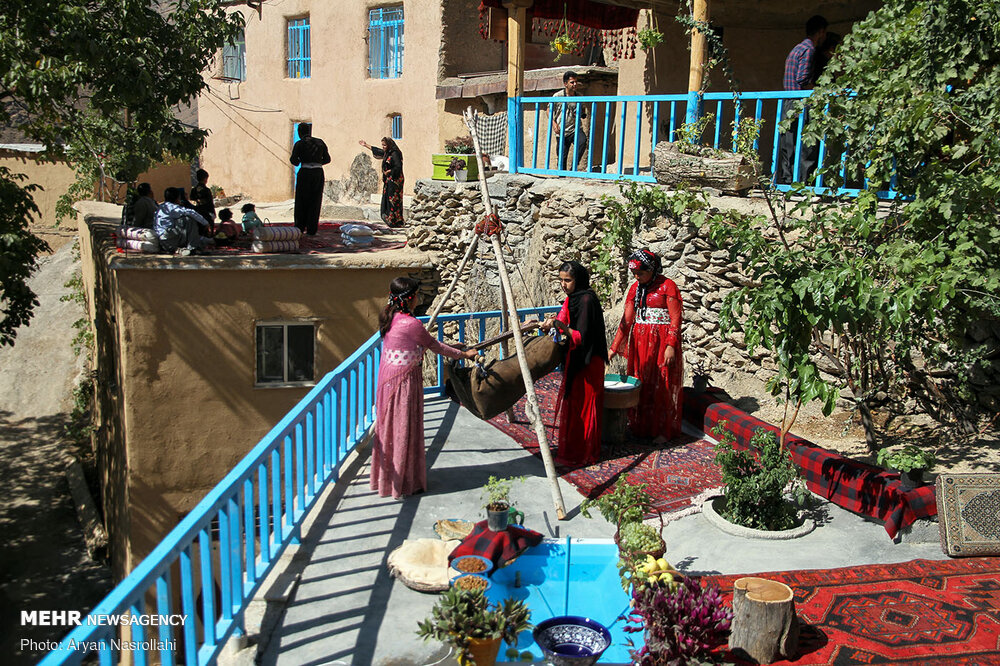 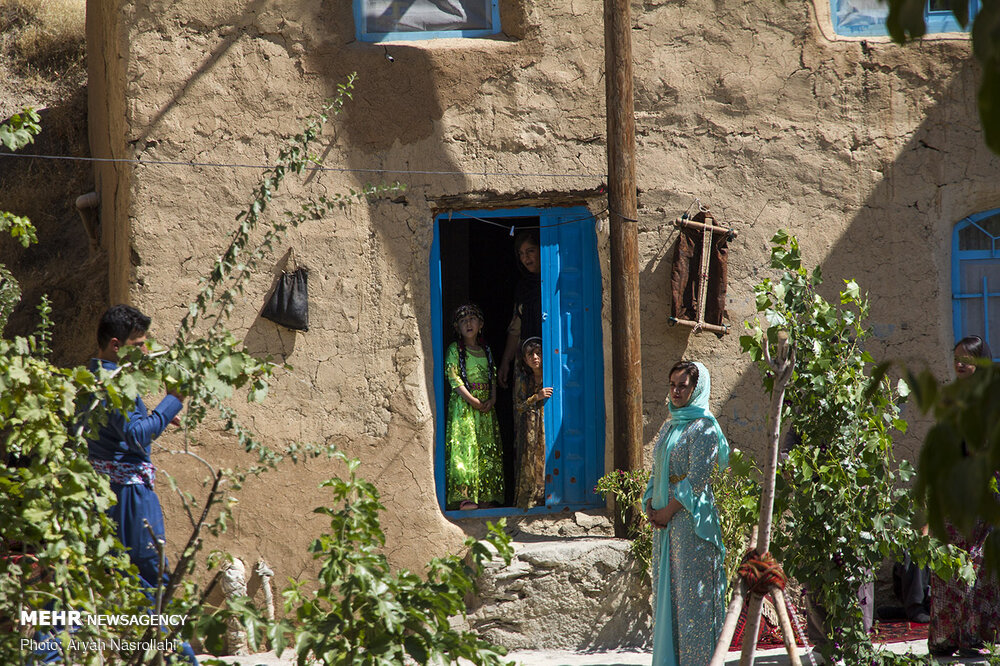 Hawrami men generally wear a shirt; a vest with an open neck; and baggy trousers fitted at the ankles. A cotton sash 3–4 m long is folded in half lengthwise and wrapped tightly around the torso on the waist. 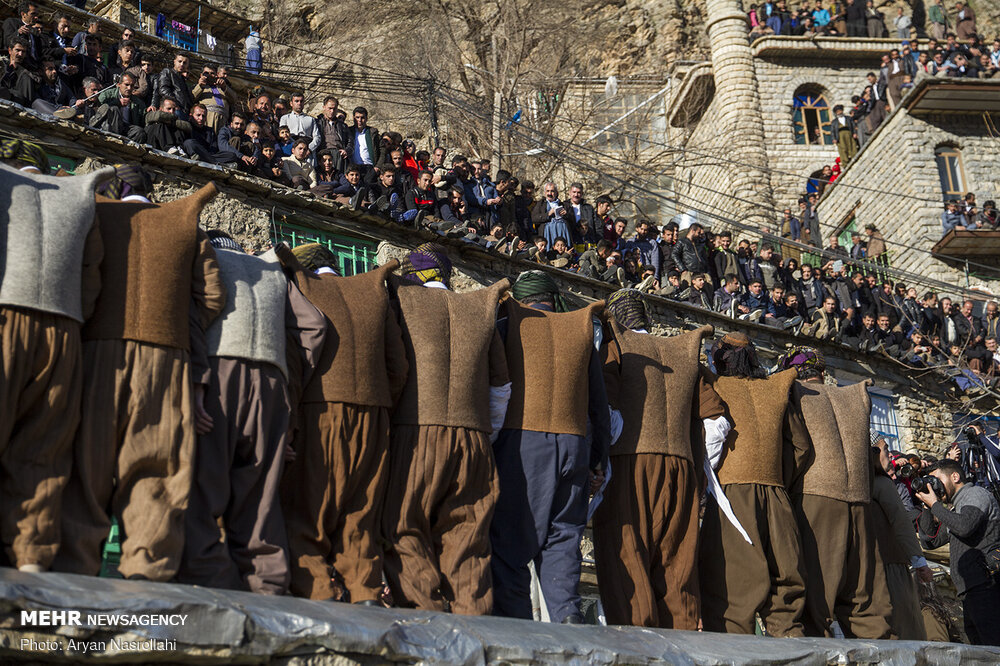 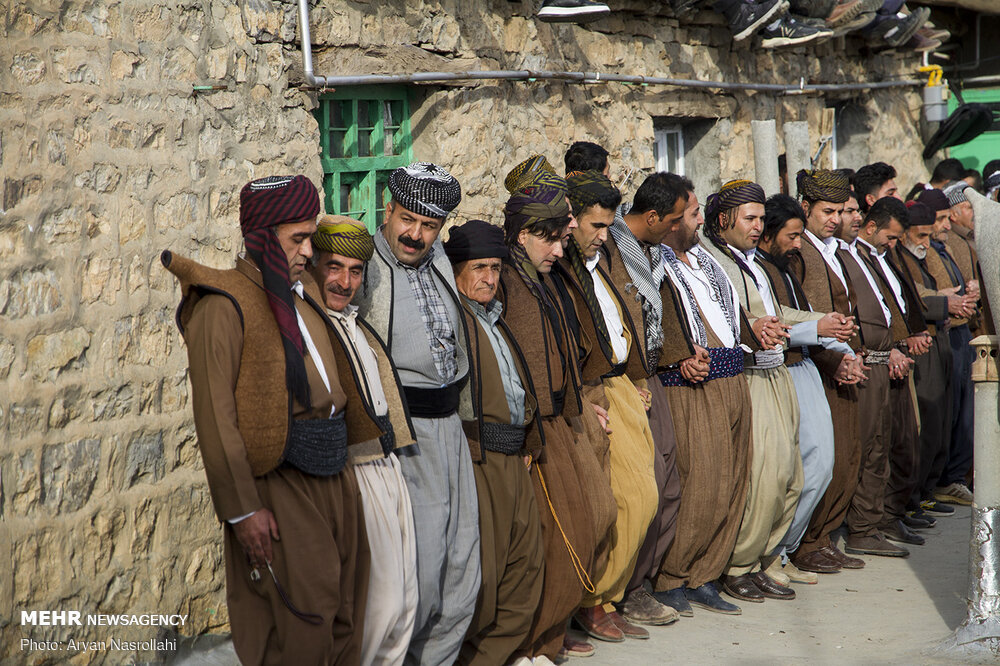 Folk music and folk dance called Halparke are very popular among the locals and Uraman has been the center of Kurdish traditional and folk music.

A special style of singing called Siah Cheshmane- meaning dark eyes- exist between locals which are performed without any instrument and is generally used for storytelling and entertainment. 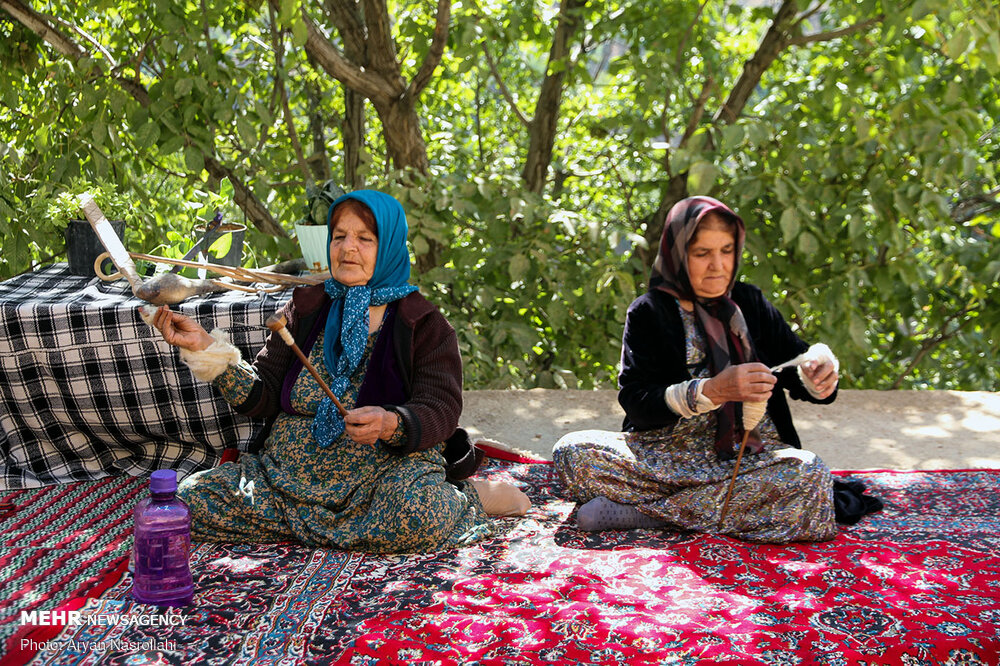 Most of Uraman Takht residents are farmers, gardeners, or raisers of livestock; while some of them work in the field of handicrafts. 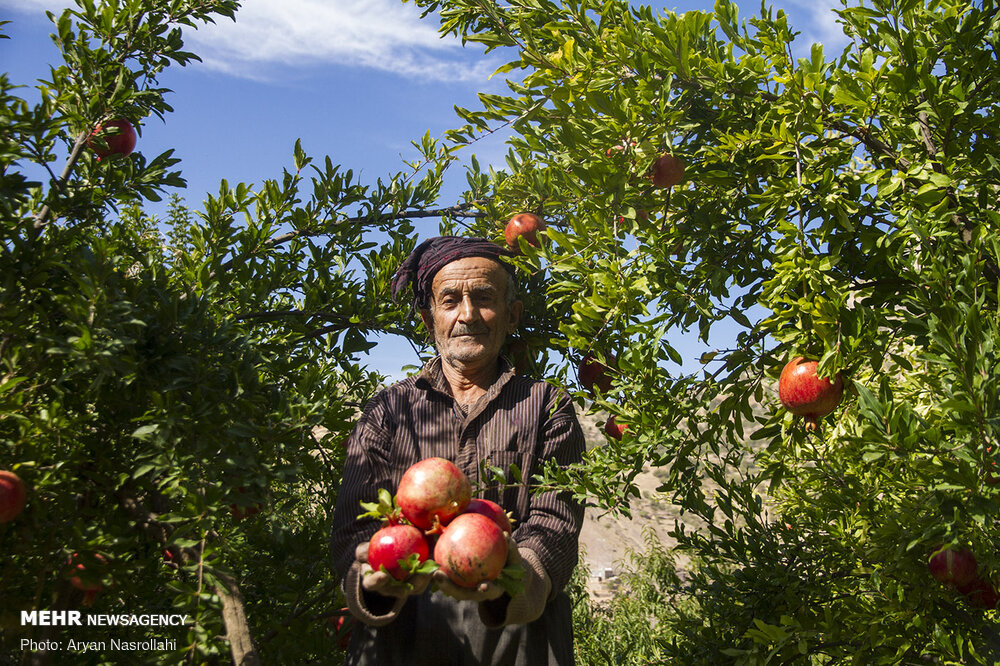 Thanks to the preservation of its heritage, architecture, and a unique traditional religious ceremony, namely ‘Pir Shalyar’, Uraman Takht village is known as one of Iran’s most impressive villages.

The Kurdish people celebrate the wedding ceremony of Pir-e Shalyar enthusiastically to express their utmost gratitude to Jamasb’s son. It is considered as one of the greatest celebrations in Kurdistan which has been marked from 950 years ago until today.

Narratives say that Pir Shalyar had magical healing qualities and a mojo power to populate the land with livestock and crops in times of trouble. He is associated with the pre-Islamic, Zoroastrian times.

The legend says that Pir Shalyar magically cured ‘Shah-Bahar Khatoun’ the beloved daughter of the king of Bukhara so that he was rewarded with getting married to the girl.

Participants from neighboring villages and areas usually make their way through the snow to Uraman Takht where festivities and prayers to God continue over a few days.

The ceremony includes sacrificing cattle, playing “daf”, all kinds of Kurdish mass dances, serving cheshin (a kind of local soup), vigil, and reading poems and prayers. The celebration is held in three stages, each in a day of three consecutive weeks.

On the morning of the first day, cattle raisers who have decided to sacrifice cattle in the celebration take their cattle to Pir Shalyar’s Garden.

After slaughtering the cattle they distribute pieces of meat among people and use some of it for preparing food for the feast: The same way that it was done 950 years ago. 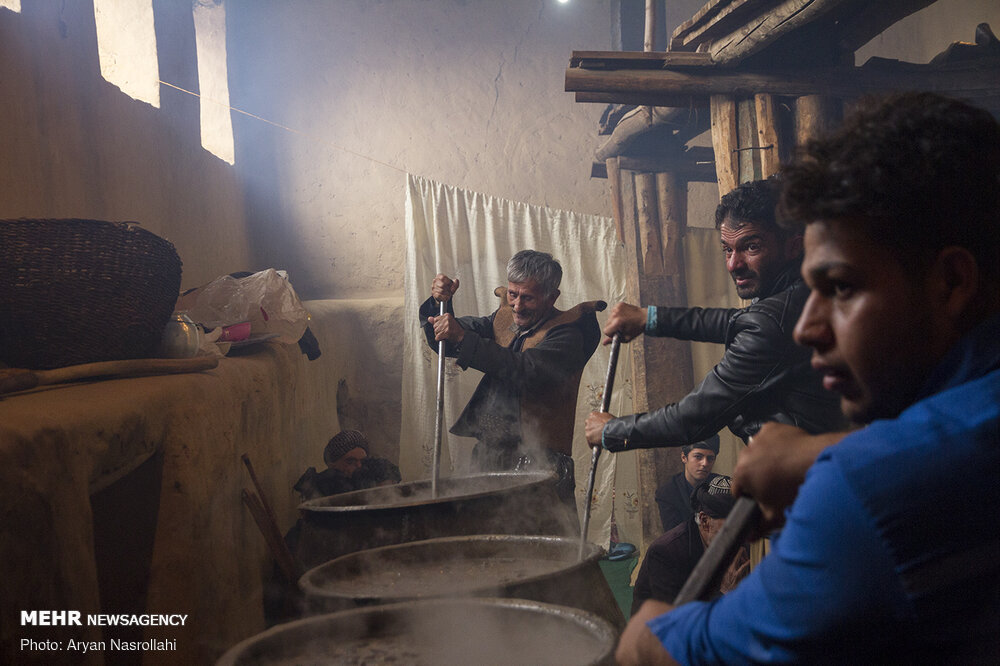 The marriage anniversary of Pir Shalyar is an ancient ceremony that promotes brotherhood, unity, and collaboration to solve the inhabitants’ problems.

After a long period, this ceremony has undergone minor changes, however, its mythological roots and symbols have survived until today. 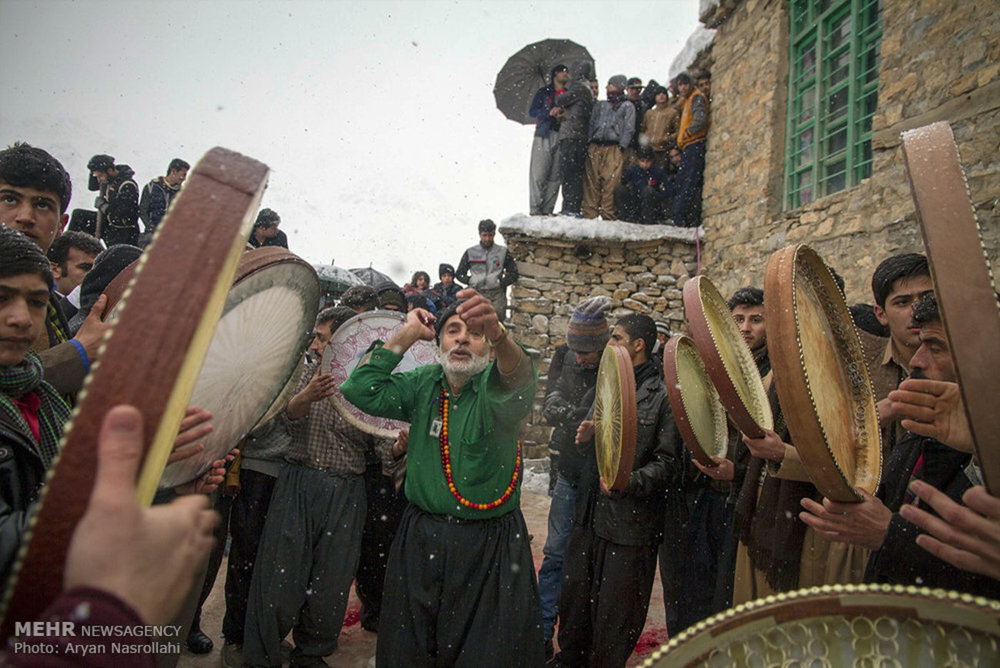 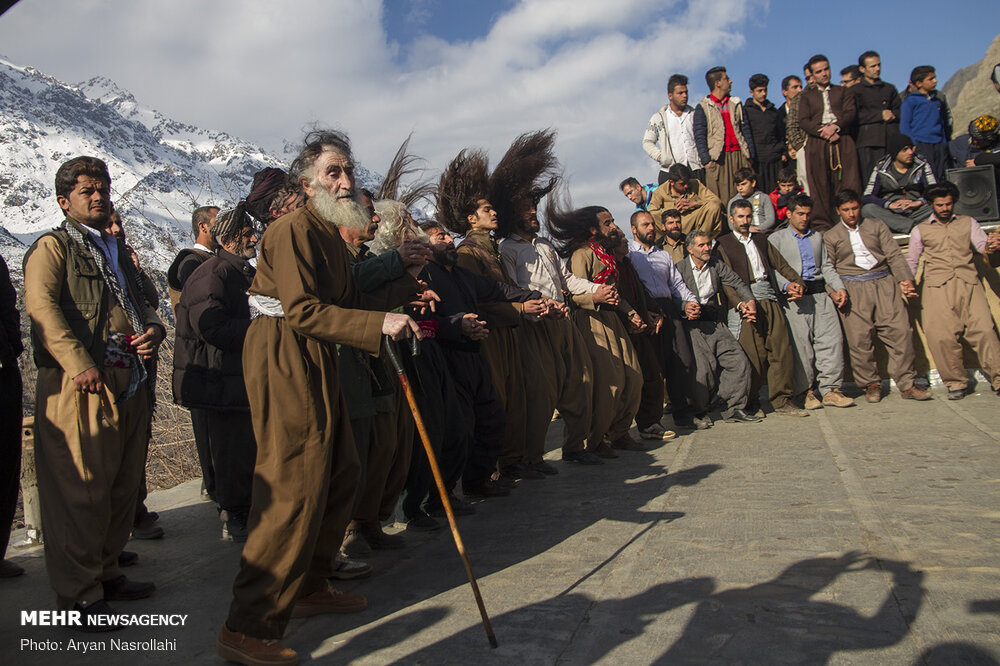 Reported and Compiled by Marzieh Rahmani